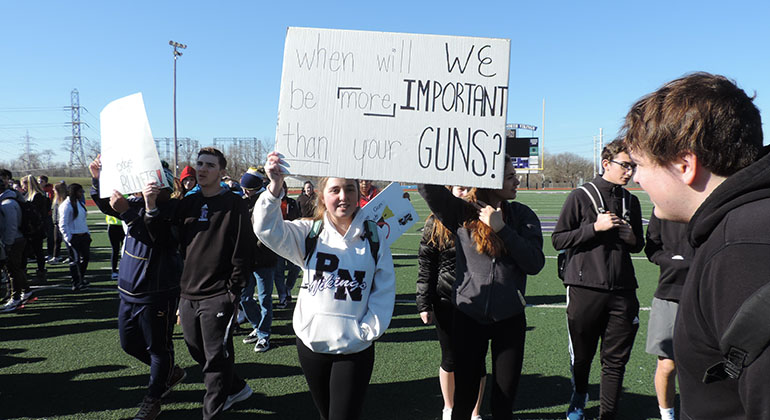 Immediately after the shooting, students across the country, including ones at Stoneman Douglas, started demanding change to gun laws in America.

“In light of what happened in Florida and all the other school shootings, I think it affects us as a public high school and measures need to be taken so that our school can feel safe,” said math teacher Joshlyn Harris.

After the the walkout was announced, members of the Social Justice Action Team at North began structuring the walkout with other Parkway schools. In the end, all the schools decided to do them separately in the same style.

“There were a lot of groups [in the St. Louis area] doing a lot of different things, so we heard through the grapevine what other groups were doing. Because the walkout was organized originally on a national level, there was some confusion about what was gonna happen here at North, so we saw that there wasn’t any leadership and took a charge and organized it,” said junior Nate Steensma.

Though administration showed support for the walkout, many students were still wary of participating, confused about what was going to take place.

“Though I do think the walk out was a good way to start getting our voices heard, I do think that overall it was a little bit ineffective in the sense that it was really hard to hear who was speaking over the microphone, so not many people were paying attention. Even though I liked the idea of the walk out, I felt like it was too much of a school structured event for it to have really any effect on the student population,” said senior Sohana Pai.

Other students did not participate because they did not agree with the walkout and decided to remain in their Academic Lab.

“I think that the walkout represents a protest type thing, which is good, but I don’t think every student believes in exactly what they are protesting, so if they did something else like spend time in AcLab for a moment of silence, I think that will be good,” said freshman David Schilp.

The walkout was intended to rally students across America and to show adults and congress that students care about gun laws and want their voice to be heard during decision making.

“I’m hoping that, even though we are kids, by doing things like protesting and making a stand, we can help make a change,” said freshman Megan Hupperts, “Adults need to understand that we see what is happening and we can think for ourselves. Our opinion matters now and in the future.”

“My message was directed at Parkway schools. I want better safety protocols and training for students. I think it’s really important for students and staff to be better prepared for intruder situations that we may have. I wanted to focus on that instead of getting political because a lot of people were out there for different reasons and I didn’t want to talk about gun control and gun regulations, which I believe in, because some people don’t believe in that and I didn’t want to shut them down,” said junior Katherine Larson.

While the current political climate lends itself to pointing fingers and making the issue of school shootings out to be partisan, many students think differently.

“I think the arguing needs to stop. The political polarization that we’re seeing in the Missouri Congress and the Federal Congress needs to stop. This isn’t a game of ‘who’s Democrat or who’s Republican,’ it’s a ‘kids are dying, people are dying, what are we going to do about that’ kind of situation. I think if we can move past party politics and move toward people politics, that’s going to work,” said Larson.