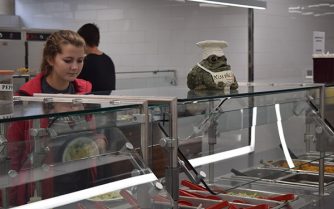 This past summer, the cafeteria was renovated to give it more room and make lunch time run more efficiently. The offices, previously next to the cafeteria, were moved across the commons and now occupy what was once an area for round tables and vending machines.

“We needed more space. We had the different stations outside the cafeteria, and it wasn’t large enough,” said head principal Dr. Tori Cain. “[We wanted to make] it more appealing for students and allow students to maneuver through in a timely fashion.”

Reactions to the new additions have been mixed. Senior James Hanselman believes that the new cafeteria suffers from a congested line but appreciates how open the interior is.

“It gets pretty bottlenecked. Everybody ends up going to the first line and then it stops.If you push past those lines, it’s very open in the middle, which is nice,” said Hanselman. “People are gonna have to get used to it.”

Cafeteria Entree Cook Paul Kikta, who has worked at North for 3 years, is pleased that the new equipment is easier to work with.

“The best thing about the new design is all the equipment; it’s really nice,” said Kikta. “We don’t have any mechanical problems with any of the equipment. It’s easier to do things, such as change out the water in the hotwells.”

The changes to the cafeteria were done as a part of a renovation plan North began as part of a bond issue from 2014. The first phase of changes were seen last year when the fine arts wing underwent a complete reconstruction.

“North is under a 10-year master building plan. They started renovations just after the 2014 bond issue, and in 2015 they started doing things in the infrastructure.” said Cain.

The renovations were done primarily with the goal of providing more space for both students and staff. More changes are scheduled in the future, according to Cain.

“The attendance window, in front of the school, will face Fee Fee, probably in the next couple years. They might start some of it in summer of 2019. All [the area] in FACS will become administration and guidance. FACS will go in the back of the two-story building [that will be installed]. Its a large plan,” said Cain. “We will have a new check-in system. You will have double doors you can step into, in between glass, like what some elementary schools have.”

Along with completely new additions, some parts of the building will get redone.

“They’re going to renovate the downstairs bathrooms, which is under our capital projects, which does come from taxpayers. They plan to redo both sets. There’s a long term plan to start looking at some other bathrooms in the building, such as the upstairs ones too.”

These changes are expected to start arriving in a couple years. Time will tell if even more are added as well.