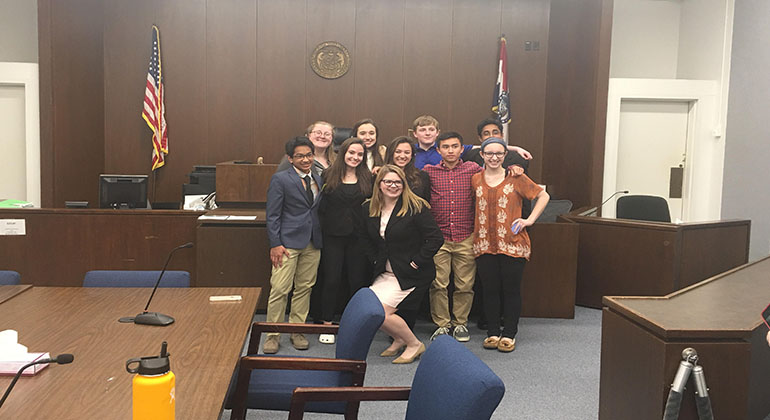 After being ranked the #8 seed, Parkway North High School Mock Trial team advanced onto the state competition which was held at the Thomas F. Eagleton United States Courthouse in St Louis, Missouri on March 23 – 25, 2018.

More than 500 students from over 40 schools in Missouri including Parkway North are involved in Missouri High School Mock Trial.

“I was very happy with our performances. Our ballet wasn’t what we wanted,” said history teacher Scott Nilsen, who coached the team to competition alongside English teacher Megan McCorkle.

Over the course of the Mock Trial season, the team trained hard by practicing debate strategies and brushing up on copyright issues in preparation for the competition since the trial was about infringement of music copyright.

“I was really proud of the improvements we made as a team. I think the team has really unified,” said McCorkle.

“I just practiced a lot and read a lot and made sure I was confident with what I was doing,” said freshman Lorenzo Prila.

This competition gives students an increased understanding of the justice system and administration of justice.

“Mr. Nilsen told me to join my sophomore year and I was like, this is too much, but then I came back junior year,” said senior Alyssa Shteyu.. “It has helped me with public speaking. I learned a lot about law. I’m practically a lawyer.”

“I’ve always wanted to become a lawyer. Mock Trial has helped me gain experience and give me a taste of what it feels like working on a case,” said freshman Jaida Williams.

“It taught me how to manage time better and take more risks with trying new things.” said Prila. “I wanted to challenge myself and see how it would work.”

Next year’s team will be more seasoned since this year’s team consists of several underclassmen who have now been to state.

“Considering how many underclassmen we have, it’s a good stepping stone for the future,” said Nilsen.