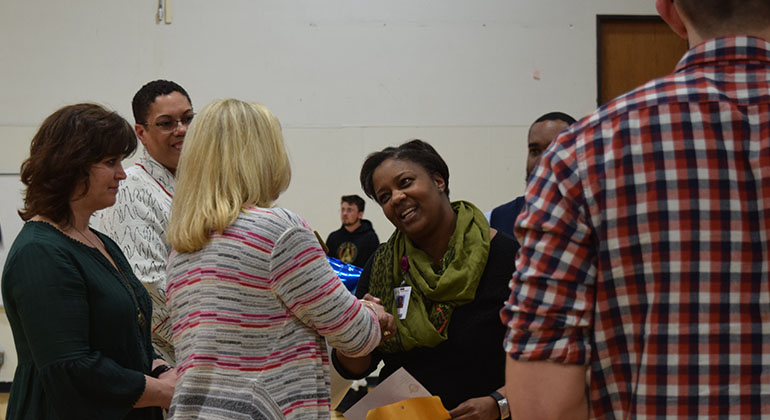 After being nominated by her administrative team, the Missouri Association of Secondary School Principals, students, and staff surprised Dr. Tori Cain at an impromptu assembly on April 5 when the Missouri Association of Secondary School Principals chose to acknowledge her as the Exemplary New Principal of the Year.
“We all played some role in the surprise. My role was communicating to the teachers so they could prepare the students,” said sophomore principal Greg Wagener.
The Missouri Association of Secondary School Principals (MASSP) is an organization that works with similar associations to better the secondary school systems. MASSP members attend conferences to improve and ensure a safe and positive learning environment for secondary schools.
After the MASSP relayed their decision to award Dr.Cain to the Parkway School District, the school district notified the administrative team. Dr.Cain did not know she had won the award until the administrative team and student body surprised her on Thursday, April 5, in the big gym.
“We basically decided the mentor was going to take [Dr.Cain] to lunch, and we purposely had him pick her up so she wouldn’t come back early,” said senior principal Jada Bell.
The administration had emailed the entire staff body, as well as making an announcement to notify staff about the assembly; however, most students didn’t know why they had been called to an assembly.
“I felt surprised about the award because we didn’t know about it. When Dr.Cain came into the gym, it was very chaotic because everyone was clapping to support her,” said freshman Aaliyah Johnson.
Dr. Cain was the principal for the class of 2018 before becoming head principal this year, but Dr.Cain has not only set an example for the seniors but for the North community.
“I think [Dr.Cain] has a very positive influence on the school…I haven’t gotten to know her well, but from what I’ve seen, she is a very good principal,” said sophomore Dylan Cothran.