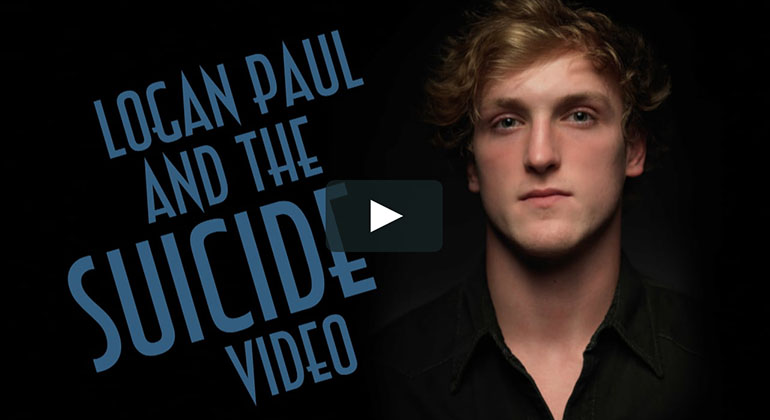 features opinion
January 19, 2018January 31, 2018 admin
“Warning: this video contains suicide and death. Viewer discretion is advised,” is the first thing viewers see when they go to click on Logan Paul’s video titled, “We found a dead body in the Japanese Suicide Forest.” The tension builds as another black screen with white text encourages viewers to “please ask for help or go to the emergency room” if they are having or know anyone planning to physically hurt themselves. The video then cuts to a solemn Paul on a Japanese city street. “This is not clickbait. This is the most real vlog I’ve ever posted on this channel,” said Paul. Finally, the YouTuber signs off with, “Now with that said, buckle […] up, because you’re never going to see a video like this again.”

Logan Paul, known for his over-the-top vlogs, is prone to posting videos with compromised thumbnails and “clickbait” titles in order to entice his 15+ million subscribers to watch, comment, and share his videos. However, on Dec. 31 Paul held up to the title and thumbnail, as fans and haters alike were shocked to find poorly blurred footage of a man who recently committed suicide.

Even though Paul claims to have been trying to raise awareness about suicide and mental illness, this wasn’t the proper way to address the issue and is not acceptable.

“[When I first saw the video,] I was like ‘Whoa, this is a lot to take in for one YouTube video.’ I thought it was wrong because a lot of his fans are young and they were probably watching it thinking this is so scary. Some of his older fans would be like he just recorded somebody that is dead,” said junior Kendall Rice, who is a Paul fan.

Besides being shocking, this video also is viewed as offensive and triggering to those who have experienced similar traumatic issues.

“As someone who has struggled with mental illness, it’s deeply saddening to see. This man was a person who literally hung himself because he was so sick of living, and to disrespect an individual like Logan did is unacceptable,”  said senior Duha Shreiteh.

The video sent waves throughout the YouTube community and social media alike, calling for action to be taken by YouTube executives, especially considering that it went against the platform’s Community Guidelines.

According to YouTube’s Policies and Safety page, “it’s not okay to post violent or gory content that’s primarily intended to be shocking, sensational, or gratuitous. If a video is particularly graphic or disturbing, it should be balanced with additional context and information. If posting graphic content in a news, documentary, scientific, or artistic context, please be mindful to provide enough information to help people understand what’s going on. In some cases, content may be so violent or shocking that no amount of context will allow that content to remain on our platforms.”

Soon after the video went live and the social media frenzy was in full effect, Paul took down the video and issued two apologies. However, these apologies seemed disingenuous and just a reaction to the backlash.

“I appreciated that he issued the apologies, but they were very short, and Logan was sort of avoiding blame in a sense…It wasn’t genuine and the fact that he ended almost promoting his own channel wasn’t okay. It was just a paragraph or two written on his phone and it doesn’t excuse his actions really,” said Shreiteh.

YouTube content creators and viewers alike also geared their anger toward the platform itself for having such a delayed response when dealing with the controversy.

“Dear @youtube, after the Logan Paul video where he shows a dead body of a suicide victim, uses that for the title, makes heartless jokes next to the body, there needs to be age restrictions for certain creators. How is this allowed on YT? His followers are children! Horrifying,” tweeted YT content creator Kandee Johnson.

YouTube eventually issued an apology saying that it has “taken us a long time to respond, but we’ve been listening to everything you’ve been saying. We know that the actions of one creator can affect the entire community, so we’ll have more to share soon on steps we’re taking to ensure a video like this is never circulated again.” As of Jan. 10, the platform has since halted production on any potential projects with Paul and has removed him from the Google Preferred ad program.

“I think YouTube owed it to the family of the man who appeared in Logan’s video and to his many viewers (especially young) to make that type of move because he obviously did not think of any type of backlash or consequences he might receive for uploading it, so he’ll learn the hard way,” said senior Kristina Tran.

Despite how fans and critics may stand on the issue, the Logan Paul controversy is one that content creators and YouTube alike can learn from.

“When you have a huge platform to inform and inspire people or make them laugh and smile, your sole purpose should be to do just that, not to be the biggest name out there or shock people. But if your name is one of the biggest out there, almost everyone will be watching your every move so there’s cause to be cautious, especially if a majority of your audience are young adolescents,” said Tran. “There are other ways to bring awareness to mental illness and suicide. Which doesn’t include exploitation of those who have taken their lives due to those things.”

With the rise of YouTube and YouTubers as leaders of online content, it is important that the platform and those on it are conscious of what they upload. While views and subscribers are necessary to the longevity of a YouTuber, clicks shouldn’t compensate for compassion and common sense, two things Paul seems to lack. It takes both of these traits to know when certain events are no longer content, but rather a time to turn off the camera, stop thinking like a YouTuber in need of views, and start thinking like a decent human being.