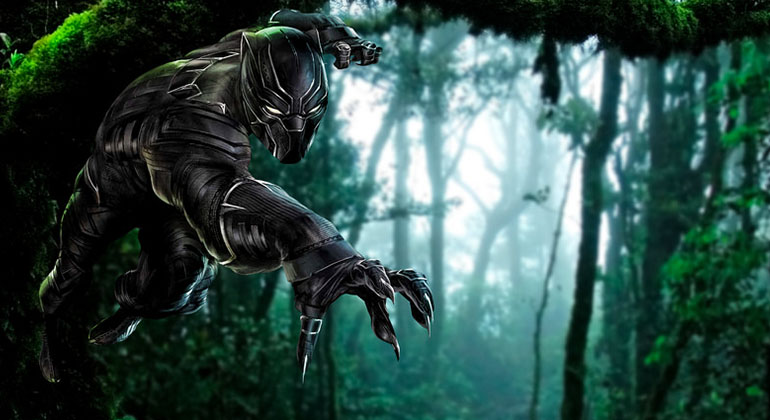 Every now again, there comes a moment in pop culture that has the ability to inspire a movement, facilitate conversation, and elicit pride. So far in 2018, “Black Panther” has managed to do all three things.

“Black Panther”, released on Feb. 16, is an addition to the Marvel Cinematic Universe that focuses on T’Challa and his return to the fictional country, Wakanda, after the death of his father, the country’s king. Through the film, audiences see not only his journey as the new king, but the conflicts that he faces with greedy villains and threats to his throne.

“I was so excited. When I first heard about it, it was when I first saw [“Captain America: Civil War”]. When I saw Black Panther in it, I was like ‘wow he needs his own movie.’ Then I heard that he was going to have one, and I was like ‘wow this is gonna be amazing,’” said senior Tyler Harris.

For fans of the Marvel Universe, the attention to detail and the film portrayal of a beloved comic is enough to want to go out and see the movie.

“Seeing the movie and how they changed up the story, how detailed things were, and how specific everything was to Marvel and Africa was great,” said Harris.

However, in addition to adding to the Marvel Universe, the movie is serving as a greater representation of the Black community and Black culture.

“I feel like it can be used as a learning situation. You can use [Black Panther and Wakanda] as a metaphor. What people expect is that they are weak and that they don’t really have much, but then you see more of a deeper intellect. [Wakanda] is actually modernized, more than the rest of the world. So when you think about how white people look at [people of color] closer and understand that we’re not weak. We’re smart and we have the [capacity] to be something,” said Harris.

Furthermore, it’s helping to disband a skewed perception of people of color that has been curated by a media portrayal comprised of stereotypes and microaggressions.

“[This movie is helping to] get rid of people’s preconceived notions. Yeah, there will always be preconceived notions, but I think that this movie really showed the true side of black people and what they are about; they’re about family, loyalty, and forgiveness. This is the light above all of the bad things,” said senior Kristina Tran.

In addition to presenting the Black community as strong and innovative, the film also shines a light on the strength and power of women through the inclusion of the all-female military, the Dora Milaje.

“Females need to be recognized for their strength, and I feel like in society, we still view women as less than, and it’s sad,” said Harris.

Movies like “Black Panther” are “adding on to the movement. When you think about movies like ‘Get Out’, that’s a black director, that’s a movie that’s adding to the cultural shift of how people view things and how Black culture is making its way to the mainstream. There will be another black movie that will add on [to the shift],” said Harris.

For many, Black Panther is more than just another superhero movie; it’s something that elicits a sense of pride in those who watch it.

“I felt proud. This movie shows powerful black people and has given them a platform. I feel like sometimes in the past [people of color and minorities] have been ashamed or afraid to represent their culture and show that side of them because that is what they get slandered for, but these movies empower people and make them feel like there’s no reason to be ashamed,” said Tran.