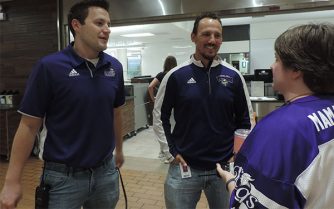 features Highlights
August 24, 2018September 6, 2018 admin
Ben Flunker, who is familiar with the Parkway District, assumed the position of eleventh grade principal this school year after Greg Wagener moved to the Instructional Services Center. Although he is new to North’s current students, he has been involved with the Parkway School District for years.

Flunker began his journey at South High as a Spanish teacher in 2013. Flunker then taught Spanish at both Central High in the morning and North High in the afternoon. Flunker became a Progress Monitoring Coach in 2015. When Dr. Shenita Mayes was out on maternity leave, Flunker stepped in as the assistant principal intern for two months at Central. Flunker then applied to be the assistant principal at North.

“Parkway has a very high reputation. The four high schools are high achieving. [The Parkway School District is] very meticulous with who they hire, so my job performance [at Central High] was probably a very good indication as to if they could trust me as a full time AP [Assistant Principal],” said Flunker.

Flunker has had experience as an assistant principal before, so he understands that his job is much more than focusing on the class of 2020. Flunker is in charge of emergency school drills, the technology, and evaluating the English, fine arts, and library departments.

“I haven’t gotten to know Mr. Flunker very well yet, but I can tell he has a lot of school spirit. I think that becoming a grade-level principal could probably be a lot to handle,” said junior Haleigh Strebe.

Another responsibility that Flunker has is CareTeam, which is a program designed to help students who seem to be struggling at North.

“I control Care Team, [which is for] our students [who] are needing a little extra support. Care Team is a program that helps support students who might not be doing well in school. The team is a group of teachers and principals who come together to talk about how we can help the student. We are way more involved with the education process,” said Flunker.

Considering Flunker was raised in a Spanish-speaking household and worked as a Spanish teacher, being bilingual is very helpful to him and the administrative team to further interaction with Spanish-speaking families.

Although the junior class had grown attached to Wagner after two years, students find Flunker to be a good fit for the position.

“Mr. Flunker seems to have a nice personality and an encouraging view on finishing high school. Like many of us, I am deeply saddened about the leaving of Wagner, but I feel very excited to see [Flunker] become adequate with our student population,” junior Caylah Johnson.

Although it has only been a week, Flunker has made a lasting impression on the North high students, staff, and community.