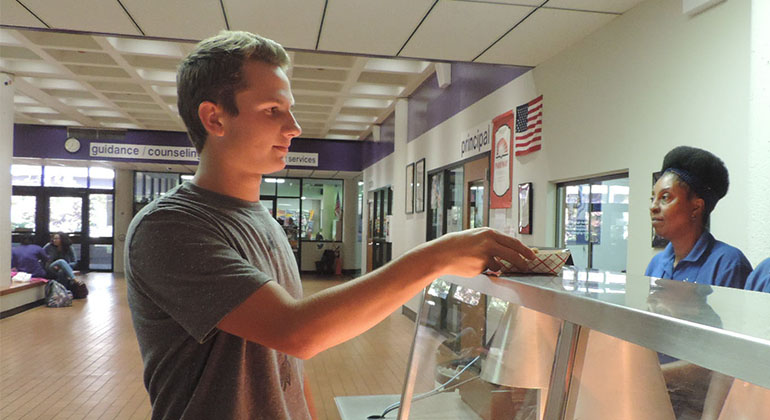 “There is no love sincerer than the love of food,” said Irish playwright, George Bernard Shaw. When it comes to school lunches, students could easily disagree with this statement. The hatred for school lunch is not a new thing, and it is often made a joke in pop culture. The problem could be that the lunches are getting smaller.

“I think you’re not getting what you paid for,” said a school lunch worker who wishes to remain anonymous. “The [Chick-Fil-A] slider introduced this year is just a chicken tender on a small bun. I think you should get at least two.”

“The actual chicken sandwich is reasonable and maybe three or four sliders is fine. One is just a ripoff,” said junior Gabe Alexandrov. “I think [the pricing is] ridiculous and I don’t why why a high school is [overcharging] the food for the kids.”

Viking Line charges $4.50 for the Chick-Fil-A items. Although the pricing hasn’t fluctuated over the years, that does not mean that the price is fair. At Chick-Fil-A, a customer can get either a grilled chicken sandwich, 12 chicken nuggets, or four chicken strips for under $4.50.

“I wish I was able to get what I paid for in [the] Viking Line. It’s such a small meal for a lot of money,” said Alexandrov.

The problem is not only present in the Viking Line, but also in the regular lunch offered.

“I know [the school offers] the normal chicken nuggets, but there’s only five. That’s way too small for a high schooler that’s growing. Growing children need way more than that. If you want more than literally just five, you’ll have to pay extra,” said Alexandrov.

Some students take part in sports and other activities after school, but may not have enough energy to perform well if they aren’t being served enough food to satisfy their bodies.

“I know [the lunch portions] have somewhat to do with the government policies. We used to be able to serve sausage pizza, but not anymore. It goes the same for Chick-Fil-A.” said the anonymous lunch worker.

Students could get their lunch from the salad bar or the sandwich bar line or bring their lunch; however, students should have more choices when it comes to their lunch and that choice should be at a fair price. A sincere love of food should be satisfied with a healthy portion.