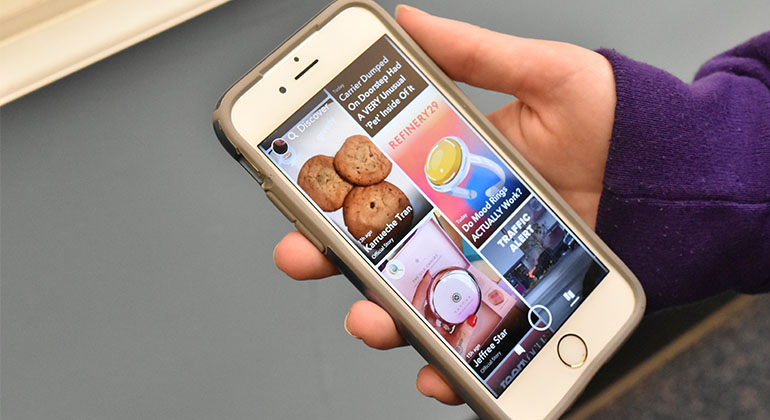 On Jan. 9, 2018, Snap Inc. released a completely redesigned layout of SnapChat, much to the dismay of a majority of its 187 million users worldwide. According to Snapchat’s website, the company hoped the update would help users “stay in touch with friends, discover exciting new content from around the world, and just use the app in general.”

The new design combines friends’ lists, regular snaps, and stories into one tab while keeping professional news sources and celebrities on a separate tab. Before, friends’ and celebrities’ stories were mixed, away from any general messages.

The interface is busier than past versions, with different elements jumbled together. Complaints about the clutter have been echoed at North and on online message boards.

“It’s so unorganized and confusing. I’m questioning the logic behind this concept,” said sophomore Krystal Yeremenko.

While the bulk of features have been criticized by the public, some users found positive aspects to the renovated app.

“The profile screen is very ergonomic, and I love that I don’t have to see the Discover page anymore,” said junior Darian Davis.

While news stories are no longer near friends’ stories, the relocation of celebrity posts is annoying to users.

“It’s pointless that celebrities are on the Explore tab. I didn’t add them for a reason,” said sophomore Emma Oldani.

Users have not been shy about disapproval since the release. More than 1 million people have signed a petition on Change.com to bring back the old version. In addition, Snapchat’s rating on the App Store has fallen to 1.8 out of five stars, despite remaining #1 with reviews bashing design concepts and demanding change.

“Please go back to the old version. There was absolutely nothing wrong with it. Developers should improve bugs, then just leave it alone,” said Yeremenko.

Despite various attempts by snapchatters to transition the app to an improvement rather than a downgrade, Snapchat’s CEO Evan Spiegel said the update will not be undone.

“I use Snapchat less now because I get frustrated,” said Oldani.

From poor reviews to a significant financial hit, the changes have been detrimental to the company overall. Developers believe there will be long-term financial benefits, as the app is much more ad-friendly now. However, users fail to notice any positive changes.

“I’m upset. I feel betrayed by the creators of Snapchat, making my life harder than it already is,” said Oldani.